I have completed another Monotype to be exhibited when my studio (23520 147 Ave SW, Vashon Island, WA) is open for the Vashon Island Holiday Studio Tour (the first two weekends in December).  This work, titled, Centauromachy, (Battle of the Centaurs), is my riff on a classical Greek theme, and favorite subject of European Renaissance artists.

The Lapiths, in Greek mythology, were a pre-Hellenic race who lived with Centaurs in Thessaly in the river valley of the Peneus.  Mythic genealogies make Lapiths and Centaurs a kindred race, the Lapith King Pirithous being the son, and the Centaurs, perhaps, sons or grandsons of Ixion.  (The myths of Ixion are confused and very interesting.  I am working on future imagery inspired by his story).

During the celebratory wedding feast of Pirithous and his bride Hippodamia the Centaurs, inflamed by wine, attempt to abduct the bride.  In the battle that ensues the Lapiths with the help of legendary heroes like Theseus, defeat and subsequently drive the Centaurs from Thessaly.

The strife between the half/man, half/horse Centaurs and their cousins the Lapiths is generally recognized as metaphor for the conflict between lower animal appetites and civilized behavior in humankind.

That was the central lesson being expressed in architectural relief in the temple of Zeus at Olympia and in the metopes of the Parthenon in Athens, where they are accompanied by similar themes of battle with Giants and Amazons. The Parthenon metopes were created just after the first Athenian victory over the invading Persians (480 BC.) 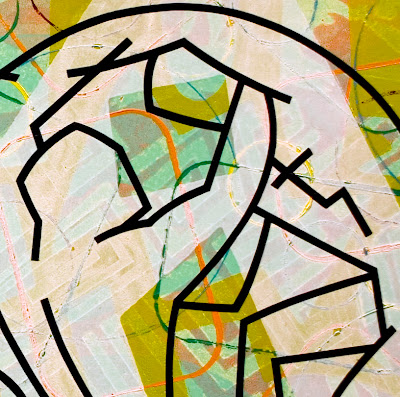