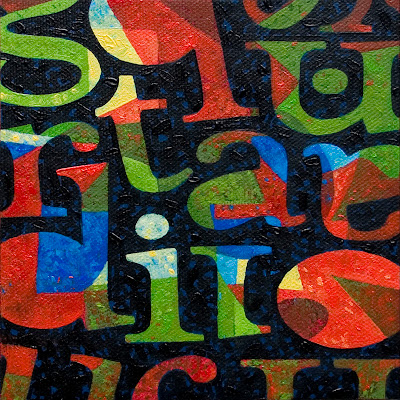 The elements of our alphabet, the alphabet I am using as subject for painting and that you are reading now, were first developed as cuneiform writing in Sumeria. ca. 2500 BCE.  Egyptian civilization also adopted the representation of symbols as syllables at about the same time. Phoenicians subsequently adopted and adapted those systems and the Greeks, around 800 BCE, began to use letter names of Phoenician letters to represent a word that began with the sound represented by that letter.  Aleph, the word for ox became A,a.  Bet, meaning house, became B,b and so on.  Romans then adapted the Greek system, ca. 600 BCE.  The Anglo Saxons used the Roman system to write (English) beginning in the 7th century, CE.