Showing posts from November, 2018
Show all

The Temple of the Winds 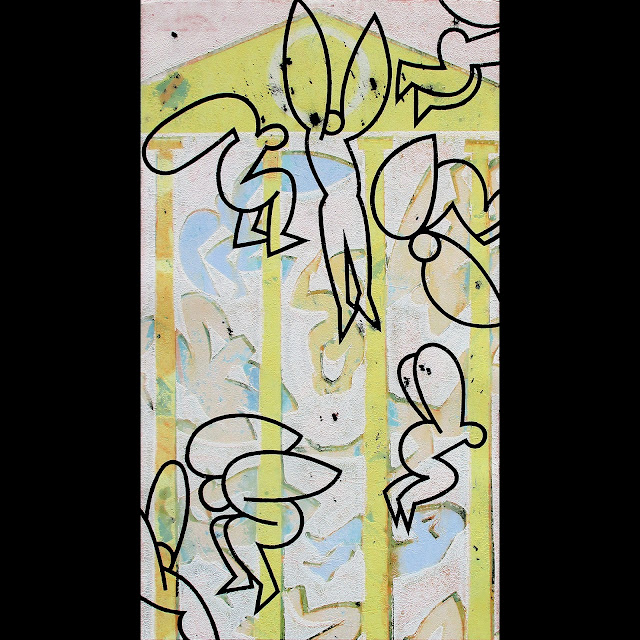 The Temple of the Winds, monotype print 1/1, Brian Fisher Not so very long ago humans anthropomorphized and deified elements of nature.  Would that we still respected and recognized our symbiotic relationship to nature instead of attempting to monetize our very existence.  The “answer my friend” to climate change depends on you and me.  Elect representatives to government that will affect responsible climate policy. Please. My monotype print “Temple of the Winds” has its inspiration in the myths of the Anemia, the four winds and their children associated with Earth's cycle of seasons and once worshiped as: Boreas the North-Wind, Zephyrus the West-Wind, Notus the South-Wind, and Eurus the East-wind. You can check out my monotype print, “The Temple of the Winds”, Studio #21, during the VIVA, Holiday Studio Tour.  This Vashon art studio tour is self guided with 38 studios & galleries, featuring 115 local artists.  December 1-2 & 8-9, 10
Post a Comment
Read more

The Bull of Heaven,  monotype print, Brian Fisher Taurus is perhaps the most prominent constellation in the northern hemisphere’s winter sky. One of the oldest described constellations, dating at least from the early Bronze Age when it marked the location of the Sun during the spring equinox, Taurus is symbol for the bull in the oldest mythologies of Sumer/Babylon, Egypt, India, Minoan Crete and Greece. Wild bulls of Europe and Asia were huge, possibly as large as 6 feet at the shoulder, Whether referenced in visual art or described in writing the bull was venerated as the embodiment of supernatural strength and virility. In the Epic of Gilgamesh, the hero Gilgamesh angered Innana, (Sumerian Goddess of love, sex war, and… justice) with his refusal to be her mate.  So spurned, she called down “The Bull of Heaven” to destroy Gilgamesh, Uruk his city, drink up all the water, devour the pasture and strip the land bare. The hero Gilgamesh and his best bro, the wild
Post a Comment
Read more 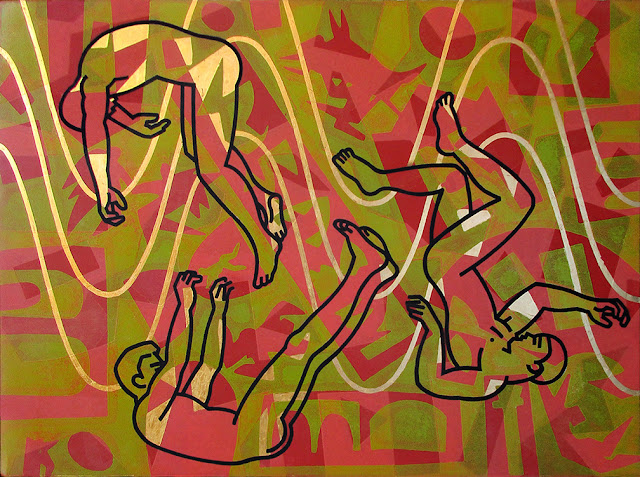 The River of Forgetting, Monotype print with 24k gold leaf by Brian Fisher  (22 1/2 x 29 in. ) In early Greek myth, Lethe was one of five rivers that flowed through the subterranean kingdom of Hades.  Souls who passed into Hades had need to forget the suffering they had endured, or perhaps, the torment they had inflicted.  So, if a soul were ever to achieve peace and reincarnate, that soul would drink from Lethe, the River of Forgetting and be cleansed of memory.    My original print, "The River of Forgetting" will be on display during the VIVA Holiday Art Studio Tour, the first two weekends in December 1-2 & 8-9, Saturday & Sunday from 10am-4pm.  Maps are available at Vashon Island businesses and online at VIVArtists .
Post a Comment
Read more 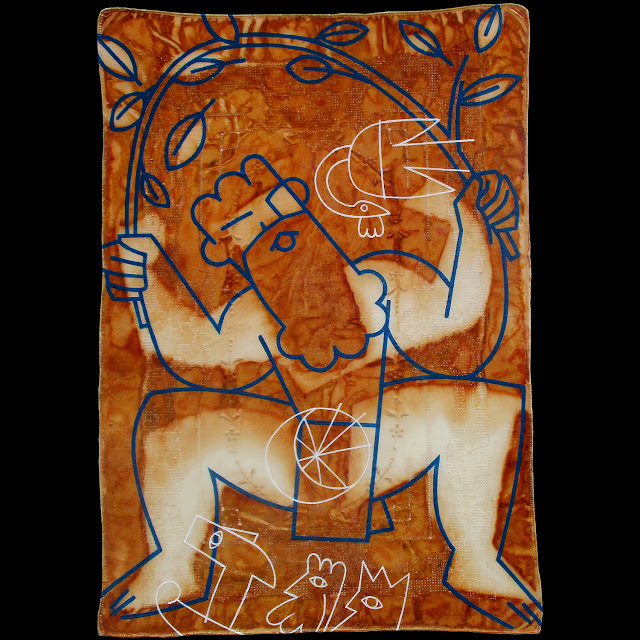 Enkidu, mixed media monotype print on vintage linen over panel, Brian Fisher “Dat ain't a mythic memory of pre-civilized humanity, dat's a song!” Jimmy Durante sings Inkydo! When Enkidu was a living myth, he and his best bro Gilgamesh were described and inscribed as cuneiform writing in clay.  Their story, The Epic of Gilgamesh, first written c. 2100 BCE recounts a king’s struggle with his fear of death, and his foolish quest for immortality. Enkidu was created by the gods as match, equal, companion and (thank the gods) solution to the extreme passions Gilgamesh exhibited as ruler of the Sumerian city-state, Uruk. Enkidu, a child of nature, roamed the plains of Mesopotamia (land between the rivers, modern Iraq).  His friends were beasts and he protected them by thwarting hunters and destroying their traps.  Gilgamesh eventually sends a priestess of Innana (goddes of love, sexual desire, fertility, war and justice), to tame him, resultin
Post a Comment
Read more 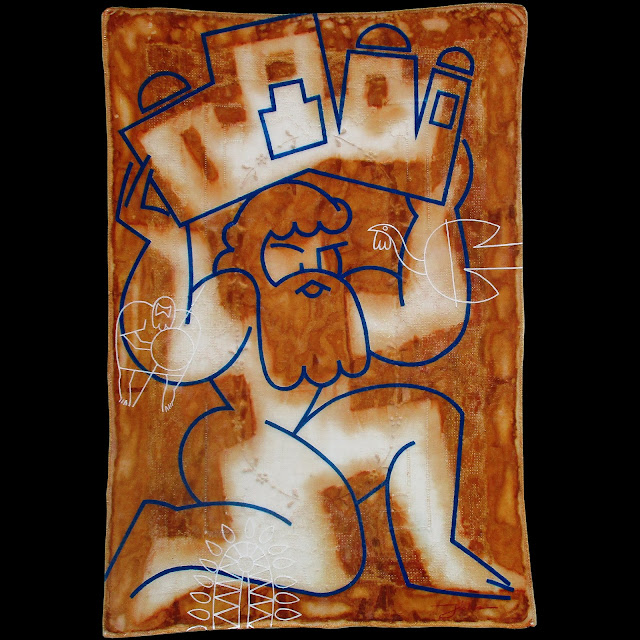 "Gilgamesh," mixed media rust print on vintage linen, Brian Fisher The Epic of Gilgamesh, regarded as the earliest surviving great work of literature,  is an ancient Sumerian poem describing the life and ambitions of Gilgamesh the demigod, hero and king of the Sumerian city-state of Uruk. The story first describes Gilgamesh as larger than life, beautiful to behold, with an expansive imagination and passions.  He’s the epitome of the civilized man.  He’s a builder, a dreamer but as it turns out, he’s also a despot. His abused and oppressed subjects pray to the gods for deliverance.  The gods respond by creating an opposite, a match, for Gilgamesh.  His name is Enkidu. He’s a natural, a wild man who's friends are the beasts of the wild.  They brawl when they meet but learn quickly to respect each other. It’s a twenty-seventh century B.C.E. bromance. With Enkidu’s tempering influence the great city of Uruk is finally ruled by a just and wise King.  Gilgamesh however is
Post a Comment
Read more 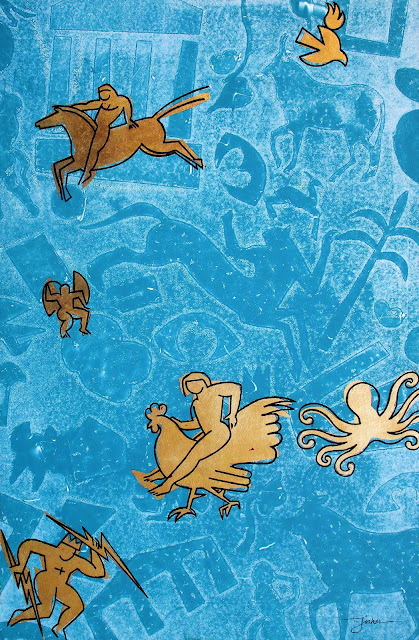 "Night Sky," Brian Fisher, monotype print, 24k gold I've been thinking about SKY and making art about it for several years.  In the VIVA Holiday Art Studio Tour, December 1-2 & 8-9, I will exhibit at least 10 images that are related to sky myths, sky gods and the cosmos.  This is "Night Sky".  “I know that I am mortal by nature, and ephemeral; but when I trace at my pleasure the windings to and fro of the heavenly bodies I no longer touch the earth with my feet: I stand in the presence of Zeus himself and take my fill of ambrosia” ― Ptolemy Claudius Ptolemy wrote Almagest or Syntaxis , his influential treatise on the apparent motions of the stars and of planetary paths, in about 150 AD. He postulated an incorrect though influential cosmology that would become the basis of our understanding of the cosmos and our place in it for the next 1,200 years.  However wrong his geocentric treatise, it included and kept alive ancient Greek trigonometr
Post a Comment
Read more

Lethe and the River of Forgetting

In early Greek myth, Lethe was one of five rivers that flowed through the subterranean Kingdom of Hades.  Souls who passed into Hades had need to forget the suffering they had endured, or perhaps, the torment they had inflicted.  So, if a soul were ever to achieve peace and reincarnate, that soul could drink from Lethe, the River of Forgetting and be cleansed of memory.    Check out "Lethe and the River of Forgetting" now and during the VIVA Holiday Art Studio Tour at Gather Vashon Gallery, 17600 Vashon Hwy SW, Vashon, WA 98070 .
Post a Comment
Read more 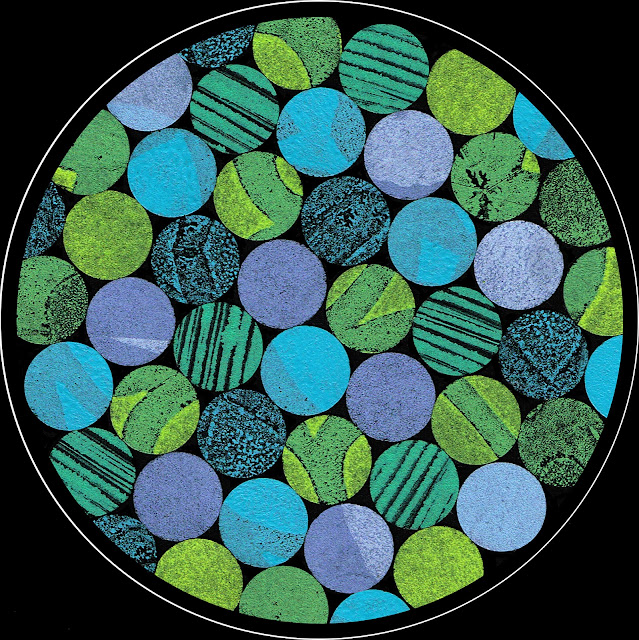 "Pazzi, Sacred Circle" by Brian Fisher, original digital print Filippo Brunelleschi designed the Pazzi Chapel, part of the Basilica di Santa Croce in Florence, Italy as a perfect space, a circle within a square with harmonious vertical proportions, for Andrea de’ Pazzi in 1429.  The vibrantly glazed terracotta dome beneath its portico was created by Luca della Robbia and is the inspiration for my original digital print Pazzi.  Today the chapel is used as the chapter house by Santa Croce friars.
Post a Comment
Read more 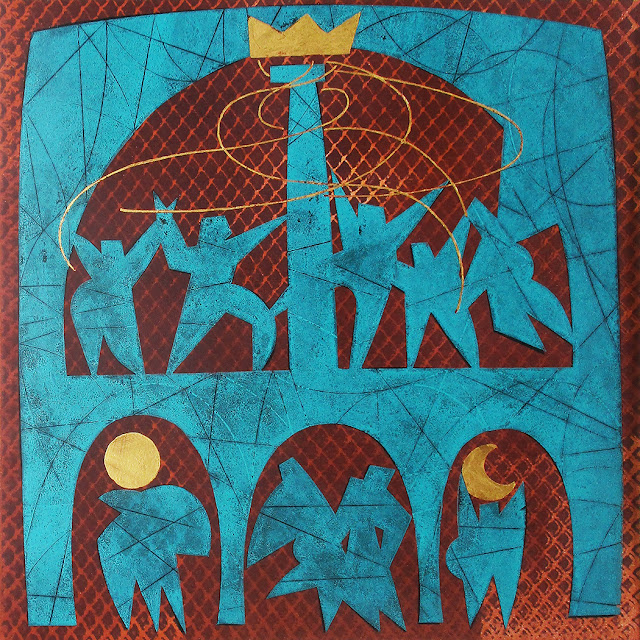 Beltane, by Brian Fisher, monotype print with 24k gold, 14 x 14 in. Today, acknowledging the change of Daylight Savings Time to Standard Time, I thought I’d post work about seasonal change. My print Beltane, (the return of the sun) was originally created and exhibited at the Tacoma Art Museum in response to artist Doris Lee’s “Maypole" in the TAM print collection. Beltane will again be exhibited for sale during the VIVA Art Studio tour, Dec. 1-2 & 8-9, 10-4 pm at Fisher Studio, stop no. 21, at 23520 147th Ave. SW. Beltane or May Day celebrates the beginning of summer and is halfway between the spring equinox and the summer solstice.  It’s one of four Gaelic seasonal festivals including Lughnasadh (beginning of harvest in early August), Samhain (celebrating the end of harvest and the beginning of winter at the end of October) and Imbolc (meaning in the belly or womb, and the beginning of spring in early February). These seasonal rituals w
Post a Comment
Read more 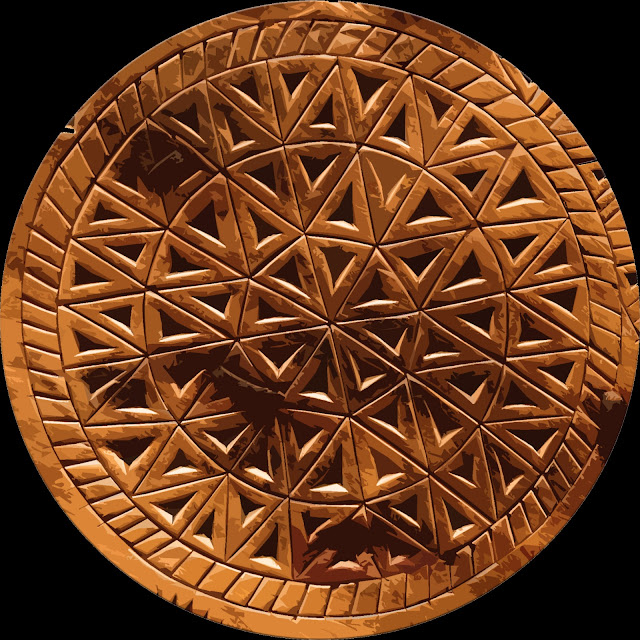 "Borgund" Sacred Circle, Brian Fisher, original digital art Scientists who look at the spiral building blocks of nature, our DNA, find stacked interlocking circles. From the whorls of our fingertips, the irises of our eyes, to our cells and the egg that gave each of us life, we are manifestations of the circle. My images about circle reflect it’s symbolic nature. Their names reference the sacred sites, temples, cathedrals, that more often than not were built and built again upon already sacred sites.  My print Borgund references a medieval wooden church located at Borgund in Lærdal Norway beside the Sognefjord.  It is one of the best preserved stave churches in Europe and combines Christian motifs and Viking themes. Related to timber framing, a stave church is built with post-and-beam construction and it’s wall frames are filled with vertical planks. The walls and doors of Borgund church are heavily carved with runic inscriptions.  N
Post a Comment
Read more
More posts