Showing posts from February, 2021
Show all

I am the Master of my Fate 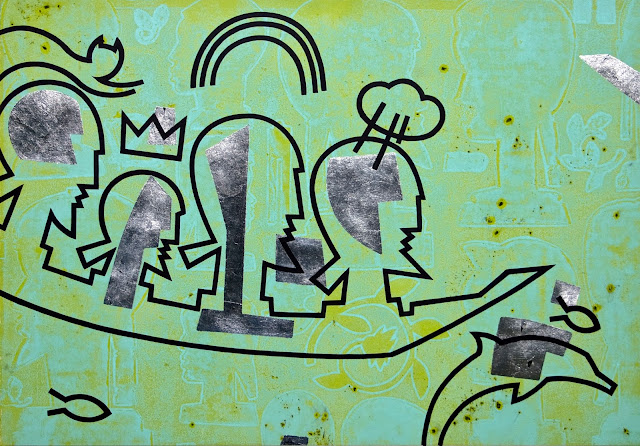 “I am the Master of my Fate, I am the Captain of my Soul”   My monotype print with aluminium leaf is exhibiting with other prints created by 7 of Quartermaster Press Studio’s artists and with 4 Vashon potters now through the end of March at Vashon Center for the Arts Gift Gallery. Invictus, Latin for invincible and the name of William Ernest Henley's inspirational poem has long been a favorite subject of mine. I keep coming back to it. We may all be in this life together but as the decision maker of our lifetimes, we are each our sole authority. “I am the master of my fate...I am the captain of my soul”
Post a Comment
Read more 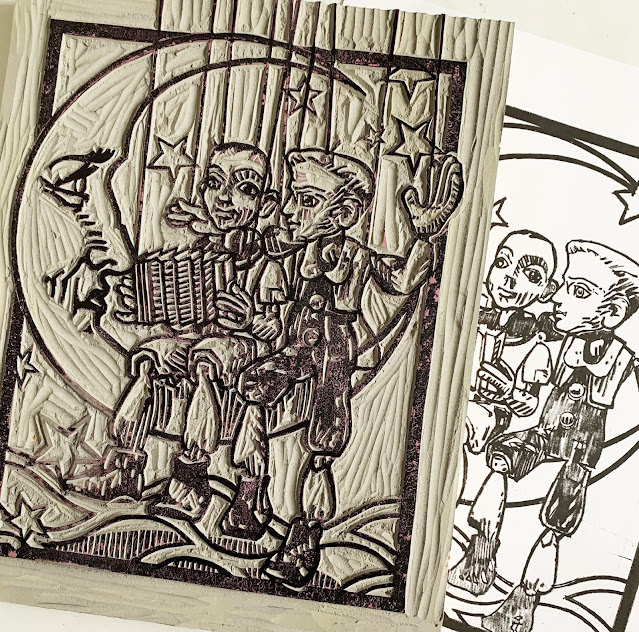 I'm at work carving my Paper Moon Linoleum block of Love Puppets- Leo and Lang . Once upon a time, before cameras were common and digital imagery had replaced film, everyone’s local fair or carnival featured set photography where a photo portrait might be taken to document the day, a friendship or love. Paper moons were a standard set. The song Paper Moon was written in 1932 and had already been recorded by many artists when in 1973 Peter Bogdanovich gave it new life by using it as background music and naming his movie, starring Ryan O’Neal, Tatum O’Neal and Madeline Kahn, Paper Moon.   The film has since become a classic and words to the song indelible.      “It is only a paper moon, Sailing over a cardboard sea      But it wouldn’t be make believe if you believed in me...” Given the time and place I’ve imagined my characters Leo and Lang born to, they must have sat in a paper moon and acknowledged their own true love.        “It's a Barnum and Bailey world, Just as phon
Post a Comment
Read more 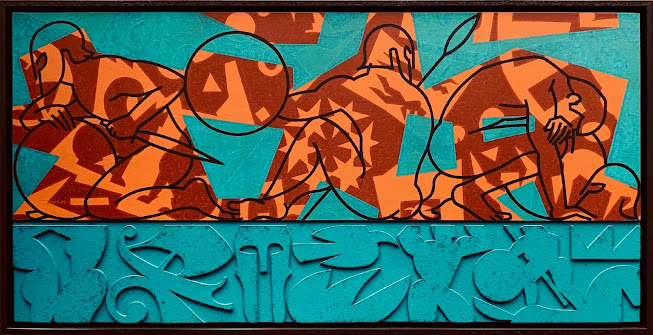 Prayer, from the Notables exhibit, came down earlier this week but is available on line at Vashon Center for the Arts Online Gallery.  You can see the show in a Virtual Exhibit , walk through, if you didn't have the chance to see it in January. Prayer 19 x 37 in. Monotype Print (1/1) and Painted wood base-relief Prayer depicts those moments proceeding battle as imagined from within the Trojan Horse.   These concealed warriors are the last hope of the Greek coalition to capture the city of Troy.   They may win the fight and city, or they could all die.   Either way the war that had already lasted ten years will end.   The portion that is print in “Prayer” evokes personal reflection before battle.   The bas-relief symbols of “Prayer” tell part of the story that proceeds this moment and conclusion of the Trojan War.
Post a Comment
Read more
More posts