The Roman poet Ovid wrote of Europa’s seduction by Zeus-

And gradually she lost her fear, and he
Offered his breast for her virgin caresses,
His horns for her to wind with chains of flowers
Until the princess dared to mount his back
Her pet bull's back, unwitting whom she rode.
Then—slowly, slowly down the broad, dry beach—
First in the shallow waves the great god set
His spurious hooves, then sauntered further out
Till in the open sea he bore his prize
Fear filled her heart as, gazing back, she saw
The fast receding sands. Her right hand grasped
A horn, the other lent upon his back
Her fluttering tunic floated in the breeze.

"Europa" is one of many new prints and paintings on display in my solo show at the Hardware Store Restaurant Gallery August 3 thru September 5 with the opening reception August 3 at 6pm.
Posted by Brian Fisher at 10:35 PM No comments:

The Shield of Achilles

The Shield Of Achilles
by W. H. Auden

She looked over his shoulder  for ritual pieties,  white flower-garlanded heifers,  libation and sacrifice,  but there on the shining metal  where the altar should have been,  she saw by his flickering forge-light  quite another scene.

Barbed wire enclosed an arbitrary spot  where bored officials lounged (one cracked a joke)  and sentries sweated for the day was hot:  a crowd of ordinary decent folk  watched from without and neither moved nor spoke  as three pale figures were led forth and bound  to three posts driven upright in the ground.

The mass and majesty of this world, all  that carries weight and always weighs the same  lay in the hands of others; they were small  and could not hope for help and no help came:  what their foes like to do was done, their shame  was all the worst could wish; they lost their pride  and died as men before their bodies died.

She looked over his shoulder  for athletes at their games,  men and women in a dance  moving their sweet limbs q uick, quick, to music,  but there on the shining shield  his hands had set no dancing-floor  but a weed-choked field.

A ragged urchin, aimless and alone,  loitered about that vacancy; a bird  flew up to safety from his well-aimed stone:  That girls are raped, that two boys knife a third,  were axioms to him, who'd never heard  of any world where promises were kept,  or one could weep because another wept.

The thin-lipped armorer,  Hephaestos, hobbled away,  Thetis of the shining breasts  cried out in dismay  at what the god had wrought  to please her son, the strong  Iron-hearted man-slaying Achilles,  who would not live long.
Posted by Brian Fisher at 8:38 PM No comments: 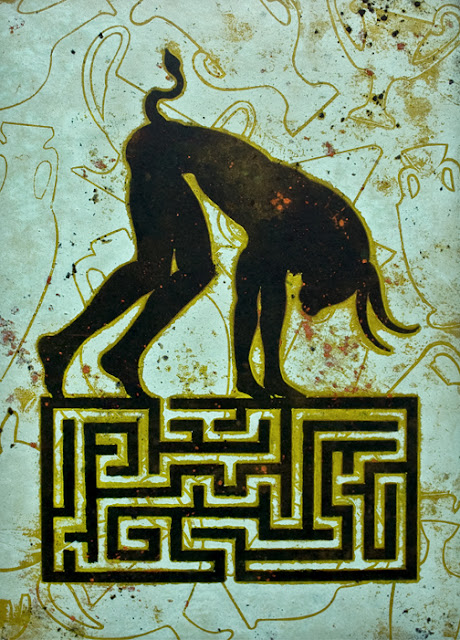 I was pleased to have Amphora Asterion, a Monoprint from my Asterion series, selected to hang in “The Printmaker’s Hand II”.

I am often inspired by Greek Black and Red amphora painting.  This new print was the first of many exploring amphora shapes as backgrounds and subjects.
Posted by Brian Fisher at 10:54 PM No comments: 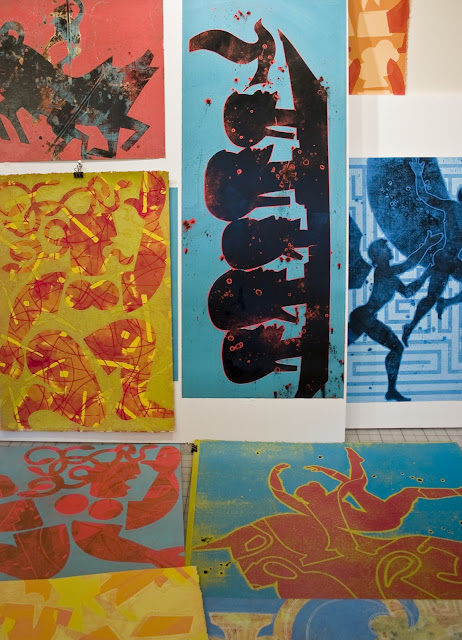 I marveled at how generally I was aided,

"the autobiography of Charles Darwin"

I marvel at how generally
I am aided, how frequently
the availability of help
is demonstrated. I’ve had
unbridgeable distances collapse
and opposite objects coalesce
enough to think duress
itself may be a prayer.

Perhaps not chance,
but need selects; and desperation
works upon giraffes until their necks
can reach the necessary branch.

If so, help alters; makes seven vertebrae
go farther in the living generation;
help coming from us, not from the fathers
not to the children.


Bless Kay Ryan and her words. She so aptly describes our evolution and also the reach that exceeds the grasp that is creative process.  For the past two months I have been attempting to churn ideas and stories into image.  Above are prints in process.

Posted by Brian Fisher at 9:22 PM No comments: