Showing posts from March, 2017
Show all

"Byzantium"  Oil on canvas,  15 3/4 x 39 3/4 in. My painting takes it’s name f ro m the ancient city of Byzantium, at the confluence of trade between the Aegean and Black Sea, founded in 667 by Byzas of Megara, Greece.  It would in the course of history become Constantinople, (324 AD), the Eastern capitol of the Christian, Roman Empire and eventually the seat of the Muslim, Ottoman Caliphate, (1453 AD). Today it is called Istanbul and a remarkable city that is representative of what is past, passing and to come. This painting is inspired by Yeats vision of a layered but fixed world that is artificial, unchanging, where ornament or object are perhaps the ideal incarnation of the soul.  These lines from his poem “Sailing to Byzantium”, in particular, are a reference for my painting “Byzantium”. Once out of nature I shall never take My bodily form from any natural thing, But such a form as Grecian goldsmiths make Of hammered gold and gold enameling To keep a dr
Post a Comment
Read more 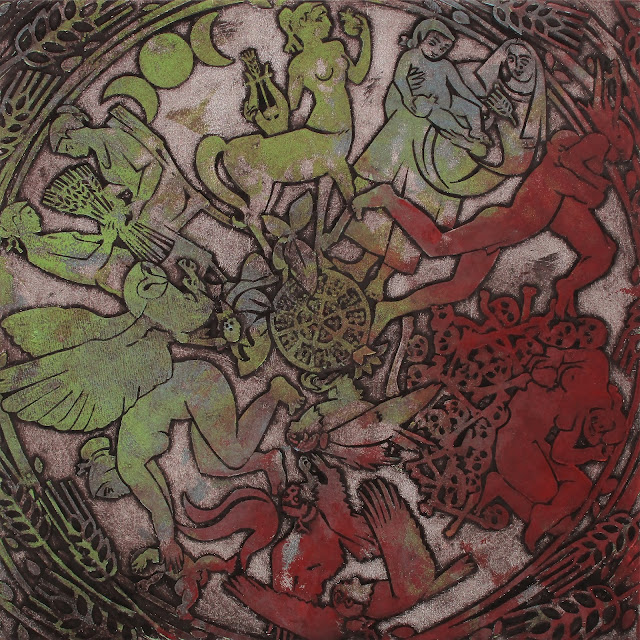 Above is my Collograph about the myth of Persephone and Demeter, named “The Persephone Cycle.” Image size, 18x18 in.  It’s on display at Hinge Gallery  in March, April  during the Quartermaster Press Print Show:  Life-Cycle  and during the "Vashon Island Art Studio Tour" at Brian Fisher Studio, map #16. Part 1: The Myth of Persephone and Demeter    Persephone was the daughter of Demeter, Goddess of fertility, harvests, and perhaps the earliest version of a Great Earth Goddess except for Rhea, her own mother.  Beautiful, virginal, Persephone was Demeter’s daughter by Zeus and the maternal focus of her life. Hades, Persephone’s uncle, fell in love with his young niece and decided that he would have Persephone for his bride but knew that Demeter would never approve of such an arrangement.  So, Hades colluded with Zeus, her father, his brother, who agreed to a secret “union” and to his plans for Persephone’s abduction. One day Persephone w
1 comment
Read more

Left: Plate for Persephone cycle series of prints  Right: "Persephone Cycle II" Part 2: The Myth of Persephone and Demeter When Zeus could no longer ignore the suffering of mankind.  He sent Hermes as emissary to negotiate Persephone’s return to her mother.  Hades reluctantly agreed to her release and in parting gave Persephone, who had eaten nothing since her abduction, a pomegranate.  This apparent act of kindness was instead a deception and curse.  Anyone who eats the food of Hades must remain in his realm.  Persephone ate only a few seeds but that was enough for Hades to make the legitimate claim that she must remain with him. Finally, Rhea, the mother of Zeus, Demeter and Hades, proposed a compromise. Persephone would have to stay with Hades in the Underworld for six months each year. The rest of the year, she would be allowed to ascend to Earth and live with her mother.  Hades would have Persephone as a consort and Demeter
Post a Comment
Read more
More posts