Showing posts with the label Centauromachy
Show all 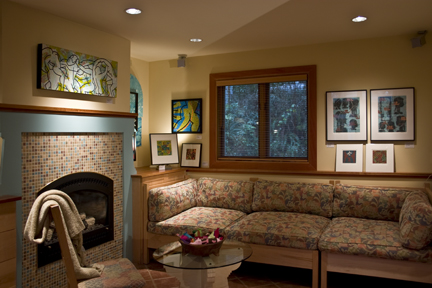 Art and Hearth In the next couple days I will be posting several images of my work as it is displayed for the 2010 Vashon Island Art Studio Tour .  Above is a shot of the hearth and posted below are images of two Monotype prints featured there. Battle of the Centaurs, Monotype (1/1), 14 1/8 x 35 1/2 in A Thousand Ships, Monotype, 14 3/4 x 11 in.
Post a Comment
Read more

I have completed another Monotype to be exhibited when my studio (23520 147 Ave SW, Vashon Island, WA) is open for the Vashon Island Holiday Studio Tour (the first two weekends in December).  This work, titled, Centauromachy, (Battle of the Centaurs), is my riff on a classical Greek theme, and favorite subject of European Renaissance artists. The Lapiths, in Greek mythology, were a pre-Hellenic race who lived with Centaurs in Thessaly in the river valley of the Peneus.  Mythic genealogies make Lapiths and Centaurs a kindred race, the Lapith King Pirithous being the son, and the Centaurs, perhaps, sons or grandsons of Ixion.  (The myths of Ixion are confused and very interesting.  I am working on future imagery inspired by his story). During the celebratory wedding feast of Pirithous and his bride Hippodamia the Centaurs, inflamed by wine, attempt to abduct the bride.  In the battle that ensues the Lapiths with the help of legendary heroes like Theseus, defeat and subsequen
Post a Comment
Read more
More posts