The Bull from the Sea

Today I am posting an image of and detail from The Bull from the Sea. It’s a Monotype I have just completed and will be displaying when I open my studio for Vashon Island’s Holiday Studio Tour, the first two weekends in December. Lately I have been reading about bulls and the richly various rolls they have played in human history. If you are familiar with the myth of the Minotaur you may remember to what the tittle refers.Archaeological discoveries of ceremonial objects and art from numerous Paleolithic, Neolithic, and particularly in Minoan and Mycenaean sites attest a long symbolic life giving connection of the bull, to seasonal waters, vegetative regeneration and the incarnate generative force of the Goddess. Dorothy Cameron in her book “Symbols of Birth and Death in the Neolithic Period” offers diagrammatic comparison that the likeness of the head and horns of the bull in Neolithic art may also be a symbolic depiction of the female reproductive organs.Cretan culture is rich with bull imagery. Carved figure and colorful frescoes found at Knossos celebrate the ceremonial leap and somersault between the horns of the charging bull. The Minoan Horns of Consecration, an emblem of bull and sacrifice resonates with another familiar Cretan figure, the goddess, arms uplifted in blessing.Crete’s mythic civilization begins with the abduction by Zeus (as bull) of Europa. With their union, Europa would become the first queen of Crete. When Minos, a descendent of Zeus and Europa, defeats his brothers to become King he prays that Poseidon, God of the Seas, might send him a white bull to sacrifice in recognition that his Kingship is divinely sanctioned. Poseidon’s gift, a beautiful pure white bull, The Bull From The Sea, appears as petitioned but Minos instead elects to substitute another bull and keeps the beautiful sacrificial animal for himself. Poseidon, enraged, curses Minos and persuades Aphrodite, Goddess of Love, to cause Minos’s wife Pasiphae to fall in love with Poseidon’s gift. A child is conceived and born, half bull, half human, named Asterion, but called the Minotaur.My Monotype, The Bull from the Sea, with gold leaf, is 14 1/8 x 35 1/2 inches and mounted on wood panel. 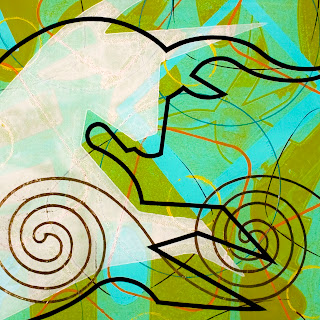