The Bull, the Bee and the Goddess

I have completed another Monotype whose imagery draws on the bull, the Goddess and Cretan ritual for inspiration.  It is called The Bull, the Bee and the Goddess.  It will be exhibited at the Heron’s Nest during Vashon Island’s Holiday Studio Tour (December 5, 6 & 12,13) and is one of several paintings and Monotypes I will be exhibiting at The Heron's Nest throughout the month of December.

A few years ago two good friends walked the El Camino de Santiago in Spain. Later, while describing the experience of hiking through Galicia and encountering shrine after shrine to “Our Lady”, one commented that these alters were probably manifestations of the Goddess filtered through the Christian tradition.  Her observation struck a personal chord and inspired my own arm chair research and subsequent visual exploration.

The Goddess or Mother Goddess is the oldest deity in the archaeological record. Her manifestations are legion. One of her earliest (neolithic) forms is that of the Queen Bee, leader and ruler of the hive.  In the ancient world bees were wisely valued as necessary to  pollination,  acknowledged as special beings and honored as symbols of regeneration.   The Queen Bee (Goddess) in particular was often portrayed  at the center of  ritual communication and dance surrounded by adoring sister bee priestesses.  Ancient cultures the world over have believed that bees and bulls are connected.
Marija Gimbuts conjectures in her book “The Language of the Goddess” that bull-begotten bees or the perception of regeneration and renewal of life which both bull and bee symbolized in many cultures may have come about  “by an observable, albeit mysterious, natural phenomenon: the sudden appearance of a swarm of insects in the carcass of an animal.”

In Minoan myth the two are inseparably linked. Bees resurrecting from the dead bull were perceived guarantors of renewal or zoe (the indestructible life force) and consequently were also equated with souls of the dead.

The Minoan new year began on the summer solstice when Sirius, the star of the Goddess, rose in conjunction with the sun. Prior to the solstice, honey from bee hives was gathered to ferment and be made into an intoxicating mead central to the ecstatic rites and celebratory sacrifice of a sacred bull.
My Monotype image with gold leaf, The Bull, the Bee and the Goddess, is 14 1/8 x 35 1/2 inches and mounted on wood panel. 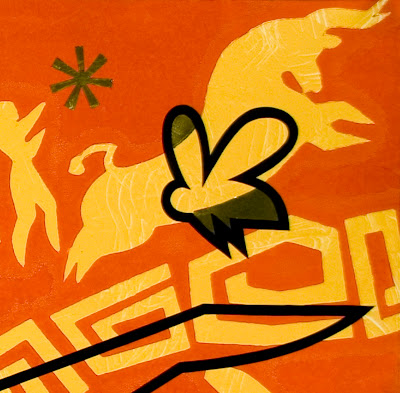