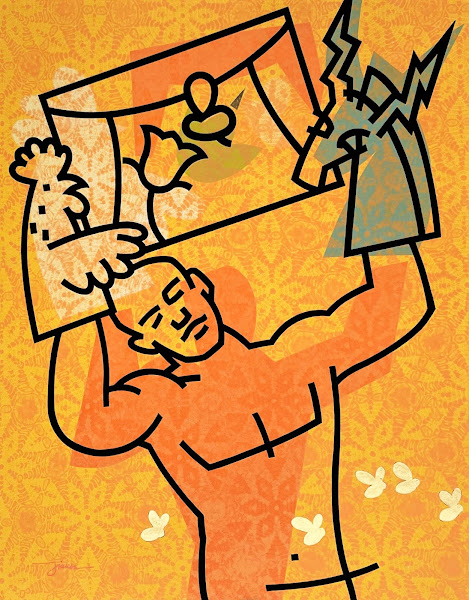 Sting Like a Bee, monotype print with 24K gold, for the “On Being Human” exhibit at Roby King Gallery, September 3-26, 2021
Bees have existed for perhaps 130 million years. An estimated 65 million years ago some of them survived the meteor that struck earth, caused global temperatures to drop and brought the extinction of larger mammals. Some of those bees had already evolved a social lifestyle, like Apis mellifera Linnaeus, the western Honeybee. Along with hive mentality they also evolved a way to defend themselves, a sting. We, the descendants of smaller mammals who also survived destruction, are dependent for sustenance on pollinating bees.
My monotype print “Sting Like a Bee” depicts one of Aesop’s teaching fables that present flora and fauna as characters with human fallibilities. The Queen of the Bees could bear it no longer. Humans were forever plundering her hives of honey, so she decided to petition Zeus for justice and a means of defense. She gathered the sweetest of her honeycombs and made her way to the very top of Mt. Olympus to present it to God Zeus. He was delighted by the bee's offering and asked what wish he might grant her in acknowledgment of the gift? The Queen Bee replied, “Bestow upon your servant a mortal sting so that I may defend the fruits of my labor and punish those who attack me.” Zeus really liked the honey but he had great affection for humans and was angered by the dark nature of her wish. He therefore said that he would give her the power to protect her honey, but she must be careful how she used the power, for where she planted her sting she would leave it, and with it lose her life.
The fable teaches that when we wish harm or do harm to others, we pay a price and ultimately will bring harm to ourselves.
Aesop's Fables apis mellifera linnaeus Brian Fisher Art Brian Fisher Art Studio honeybee Monotype Print Roby King Gallery sting like a bee