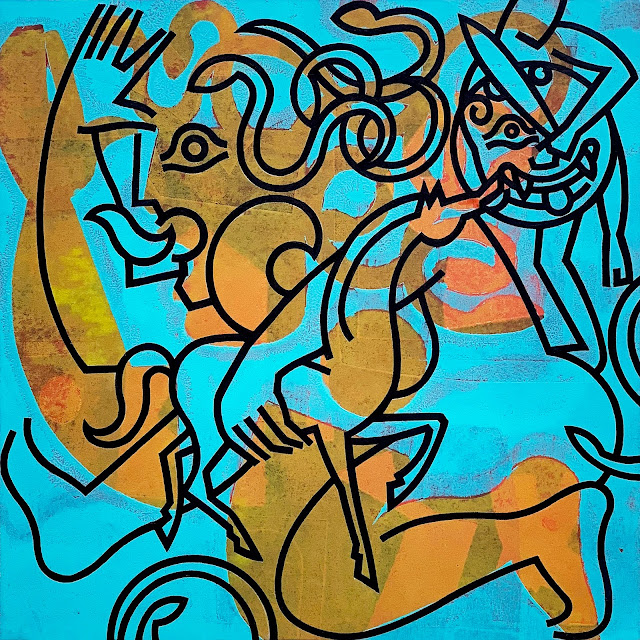 Medusa, my monotype print, will exhibit at Roby King Gallery, Bainbridge Island WA, Feb 7- March 1, 2020 in "A Trio of Print-makers" with work by Lynn Brofsky, Brian Fisher & Steve McFarlane. So delighted to be part of this talented lineup!  The opening Reception is Feb 7, 6-8 pm. Check it Out!

The Myths of Medusa and Perseus have been told and retold for time out of mind and the image of Medusa as Gorgon can be found in art and architecture for thousands of years.  Even today she appears on the flag of Sicily and ever since Gianni Versace adopted Medusa as his logo in 1978 her iconic image has become even more pervasive.

The eighth century BC poet Hesiod, of Boeotia, composed a poem, the Theogony, about the creation of the world and the Greek gods.  In it he describes the Gorgons, the mortal Medusa, whose name comes from the old verb médô that means “I rule,” and her two immortal sisters, Sthenno or “strength” and Euryale “the one that leaps or wanders widely.”

Hesiod tells us that Poseidon, god of the sea, earthquakes, storms, and horses made love to Medusa “in a soft, grassy meadow among the flowers,” and that “when Perseus cut off her head, Chrysaor the giant and Pegasus the winged horse leapt out”!

Medusa's "special power" was her knack for turning all who looked upon her face to stone.  She apparently did a lot of that until one day Hero Perseus arrived on the scene.  Perseus took her head with aide from his father Zeus who gave him an adamantine sword, Hades who gave him a helm of invisibility, Hermes who lent Perseus winged sandals to fly, and from Athena who gave him a reflective shield so that he could see what he was about without staring directly at Medusa while he cut off her head.

Perseus was a practical Hero and therafter took Medusa's head along on his quests weilding it when life threatening situations arose, petrifing one and all.