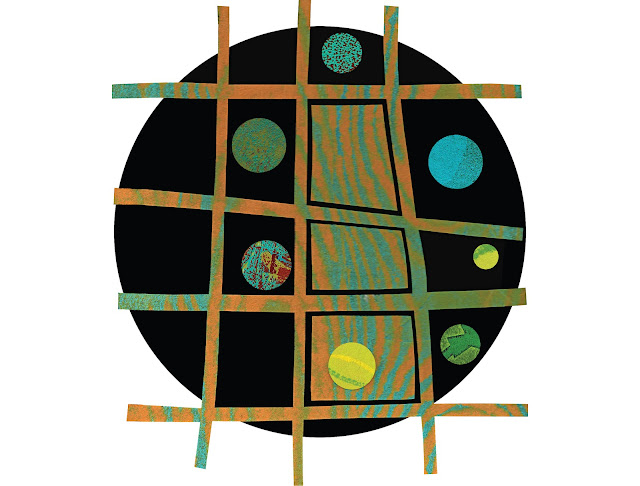 Mauna Kea, from my sacred circle series, informed by sacred sites, sacred geographies, is a Ltd. Edition, Original Digital Print (1/12). It was created in 2019 but has never been exhibited until now. Stop by my studio 23520 147 Ave SW, Vashon Island, (#3) during the 2022 VIVA Holiday Art Studio Tour, the first two weekends in December.

My print “Mauna Kea” is inspired by the most prominent geographic feature of the Hawaiian Islands, a volcanic mountain named Mauna Kea and by the incredible stick maps that Polynesian and Micronesian sailor explorers once made and used to chart Pacific open water travel.In Hawaiian traditions of creation, the Earth Mother, Papahānaumoku, and the Sky Father, Wākea, created the Hawaiian Islands, with Hawai‘i Island being the first and Mauna Kea as the piko (navel or center of beginning or ending), of their union.On Mauna Kea’s sides are many shrines to the pantheon of Hawaiian gods and (it has been suggested) to astronomical phenomena. The top of Mauna Kea was historically considered kapu and only accessible to priests, or the highest chiefs. Beginning in the late 1960s, a number of large telescope observatories have been built on the volcano at the 13,796 ft. summit, where the air is cold, dry and visibility of the heavens is near perfect.In 2019 the construction of the “Thirty Meter Telescope”, was stopped by protests concerning the continued development of the mountain that many Islanders consider the most sacred place in the Hawaiian Island chain and in their own cosmology. The protests triggered additional environmental studies in 2020-2021. Those studies are under consideration before any more powerful observatory of our universe is built on Mauna Kea.