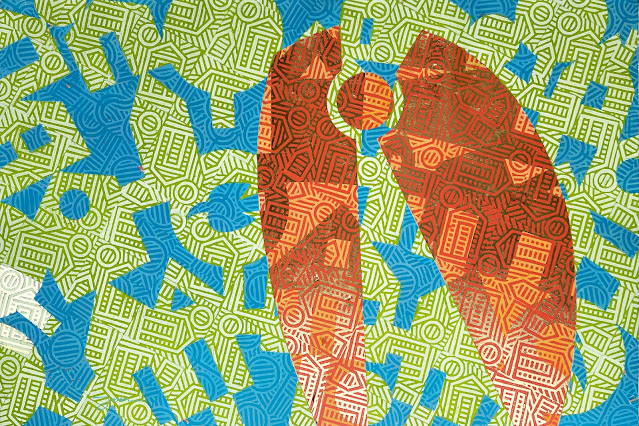 "Angel Over Atwood", relief monotype print. (1/1). 24" x 36", is named for a small town on the prairie located at the intersection of US Highway 36 and Kansas 25 in Northwest Kansas and nestled in the Beaver Valley on Beaver Creek. This was Cheyenne, Comanche, and Arapaho country before white European settlers replaced them. Under the Works Progress Administration Atwood built a lake and when I was born called itself- Atwood, City by the Lake.
After the American Civil War my Fathers’ family moved to this area and to other small towns and land around Atwood. They came at a time when life meant struggle and to simply endure could be thought of as success. They brought little with them other than the belief that they would persevere and an ability to laugh often. Above all they were practical, though some of them were quite religious and (according to my grandfather) superstitious. I am sure that some saw angels in the tall grass as the wind swept the plains or perhaps in the endless sky with clouds stacked all the way to heaven.
I think it is perversely human to ascribe what is natural phenomena to the supernatural, but I like how Rabbi Adin Steinsalz would have angels be the phenomena. “The angel who is sent to us from another world does not always have a significance or impact beyond the normal laws of physical nature. Indeed it often happens that the angel precisely reveals itself in nature, in the ordinary common-sense world of causality.”
My Grandfather Fisher liked to tell the story of how Atwood became the Rawlins County seat. The towns of McDonald, Blakeman and Atwood were rivals competing for the distinction. Blakeman even went so far as to build a courthouse which seemed to settle the matter until the night when citizens of Atwood and other likeminded settlers stole the building and moved it to Atwood. This story seems almost physically impossible. The courthouse must have been a small frame building but to move it at night? And when horses and wagons were the only means of conveyance? Perhaps angels played some part…
Angel Mythology Angel Over Atwood Brian Fisher Art Brian Fisher Art Studio Monotype Print Relief Print