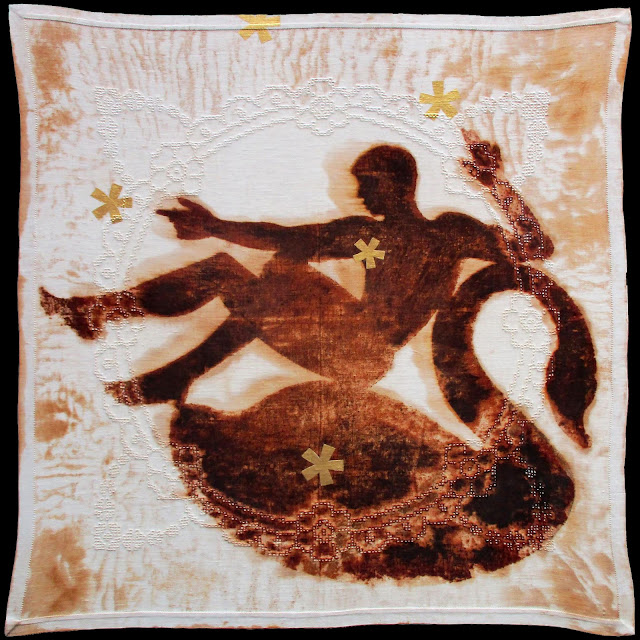 "Cygnus", my Rust Monotype Print, will be in the Vashon Center for the Arts live auction, “Masquerade: A Midsummer’s Night Dream”, September 21, 6:45-8:45 pm.  Here's what the schedule looks like for this year's annual fundraiser.

“Cygnus” represents transformation and is a Rust Monotype with 24k gold on vintage linen mounted over a coped wooden panel.
My father’s voice first conjured the mythic stories of Ursa major and minor, the Pleiades, Andromeda and Cygnus into my consciousness while we lay on our backs in the grass of my grandparent’s Kansas farm, gazing up through night binoculars.
Cygnus is one of the most recognizable and brightest constellations in the Northern sky from June to December.  Look up. Of course those are wings, a beak and tail!  Yes, I see a swan!
In one Greek myth, Cygnus was Phaethon’s lover.  When Phaethon died by Zeus’s lightening bolt (he had scorched the earth while driving his father’s Sun chariot), Cygnus was inconsolable and was changed by grief.
Ovid  writes in Metamorphoses II, “As Cygnus mourned, his voice became thin and shrill, and white feathers hid his hair. His neck grew long, stretching out from his breast, his fingers reddened and a membrane joined them together. Wings clothed his sides, and a blunt beak fastened on his mouth."
"Cygnus became a new kind of bird: but he put no trust in the skies, or in Zeus, for he remembered how that god had unjustly hurled his flaming bolt.
Instead, Cygnus looked for marshes and broad lakes, and in his hatred of flames chose to inhabit the river that would quench fire.”