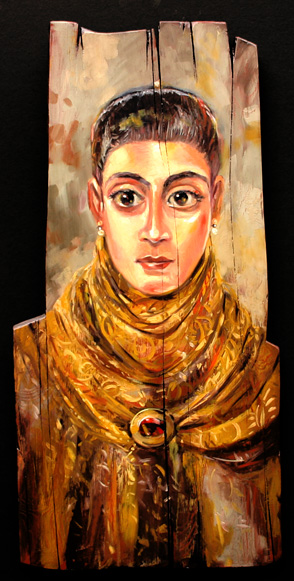 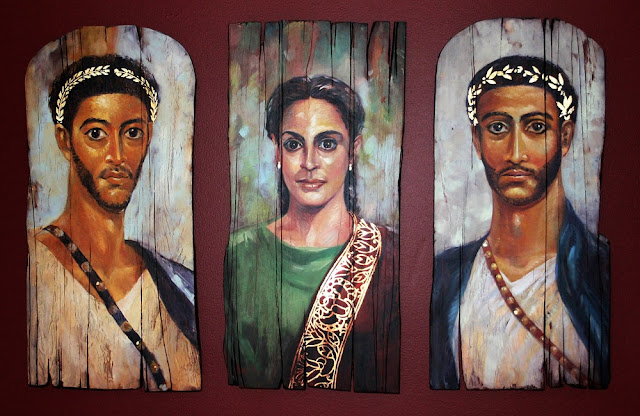 Faiyum is an Egyptian city and region located about 80 miles southwest of of Cairo.  Faiyum Governorate, the modern capital, is also the ancient site of Shedyt or Crocodilopolis.  Founded around 4000 BC,  it is the oldest known city in Egypt and one of the oldest settlements  in Africa.

During the Ptolemaic dynasty, (305 BC to 30 BC), and after, the Faiyum region was a major producer of grain and cotton for the Roman world.  Today Faiyum is particularly know for the remarkable tomb portraiture created during it’s Greco Roman period of affluence in antiquity.

The Faiyum portraits or Fayum portraits, were created as encaustic on panel or sometimes tempera on linen.  They were bound into bands of cloth that wrapped the mummified wealthy for burial.  About a thousand of these portraits have been discovered.  Each is a remarkably realistic portrait, sometimes double portrait, of people that lived 2000 years ago.  Buried with their “subject” the portraits  were never meant to be seen again.

A couple years ago a friend and patron asked if I would make for her my own interpretation of the Faiyum portraits.  I was immediately intrigued.  I ended up panting four portraits, a double portrait and one large interpretation of a shroud painting.

Above and below are my take on Faiyum.  It was a whole lot of fun painting these.