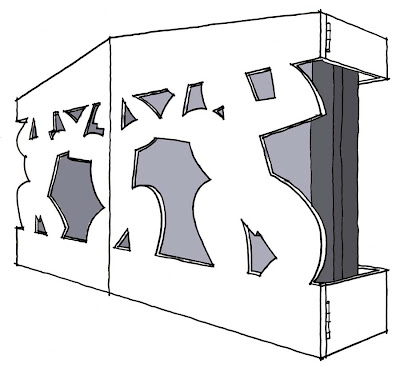 I have been listening to Galileo's Daughter by Dava Sobel as I work on a new comission. The book is constructed around letters from his daughter Sour Maria Celeste and is about Galileo Galilei's life as the foremost Italian scholar of the seventeenth century, his earth shaking discoveries, all framed by his eventual clash with Catholic doctrine.
I am often drawn to the investigation of definition as subject or the edges of redefinition. The place where one myth is replaced by another or the explanation that reflects current discovery and the truths of a new epoch take hold. The science and art of Italy in the seventeenth century were all about new truths and redefinition of the accepted truth.
While listening to Galileo's Daughter I have been working on several images and a commission who's subject is “Pillars of the World.” These originally began with a Monotype print titled Telamones. Telamones are the male equivalent of the female Caryatids of classical architecture. Human figures that act as columns to support entablature and roof. They may also be thought of as connections between the earth and sky, separating but linking what is below and what is above so that you and I may occupy the world between.
In near-eastern myth these pillars are children of Gaia (the Earth) and Ouranos (the Sky) and are the Titans; Krios, Koios, Iapetos, Hyperion.
Led by a fifth brother, Kronos, they conspire to overthrow their father and when Ouranos descends from the heavens to be with Gaia, they seize and hold him while Kronos castrates him with a sickle. Kronos assumes his father's position and powers. A new age is born. Eventually, it would seem inevitably, Kronos is deposed by his own son, Zeus and the Titans are banished to Tartaros where they become in cosmological terms bearers of the entire universe. Cool story!
These myths and their evolution reflect the expansion, clash, and assimilation of peoples and their beliefs over time. Sometimes a long time. Probably a much shorter time today than at any other. It has only taken the Catholic church four hundred years after it put Galileo on trial for heresy to accept his writings, complete its rehabilitation of the great scientist, and erect a statue of him inside the Vatican walls.
Here are a drawing and photo of the commission I am working on. It's a flat screen video cabinet with Telamones as motif.