Showing posts with the label monoprints
Show all 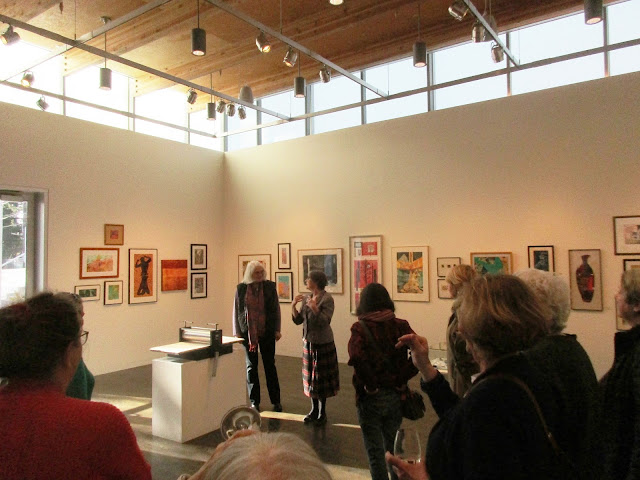 Last night Quartermaster Press Studio kicked off it's 25th Anniversary Celebration and retrospective exhibit with a talk by Valerie Willson.  She spoke about QMP's founding in a potting shed on Quartermaster Drive in 1993, the subsequent move to it's present location at Beall Greenhousese in 2010 and the studio's group history and the evolution of printmaking at Quartermaster Press.   Many of the founding members were present to hear Valerie briefly describe the experimentation and complexities of making fine art prints.  The Koch Gallery and Vashon Center for the Arts Lobby walls are filled with almost every kind of print process.  Valerie pointed out with explanation to examples of  etchings, viscosity monotypes, monoprints, collagraphs, linocuts,... and more! Co-curator Pat Churchill introducing Valerie Willson at QMP 25 opening April 6, 2018   Print enthusiasts and QMP fans listen to Valerie Willson speak at QMP 25 opening April 6, 2018 QMP 25 Spec
Post a Comment
Read more
More posts