Showing posts with the label Medea
Show all 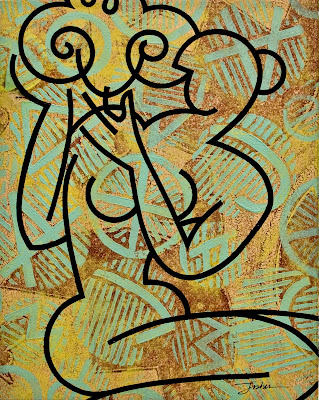 Medea , Monotype, (13.25 x 17.75 in.)  “Behind every great man there is a great woman,” or so the saying goes.  In the myth of The Argonautika, Medea is the heroine behind the hero and is absolutely devoted to Jason, though she also desires power in her own right.   She is the most complex character in The Argonautika and not everything works out well for those she perceives as a threat or for those who have wronged Jason. Because of Euripide’s characterization of her in his play “ Medea ,” she will forever be maligned and remembered for “doin’ it for herself.”   However, without Media, there is absolutely no “winning” of the Golden Fleece for Jason.   Only Media’s magical knowledge and sacrifice of political allegiance, position and family make Jason’s Quest for the Golden Fleece possible.   The Monotype,  Medea ,  will be exhibited in my studio, 23520 147th Ave SW, Vashon Island WA., Studio  #11, during the 2011 Vashon Island Holiday Studio Tour.
Post a Comment
Read more
More posts