Showing posts with the label Ents
Show all

The Pull of the Earth 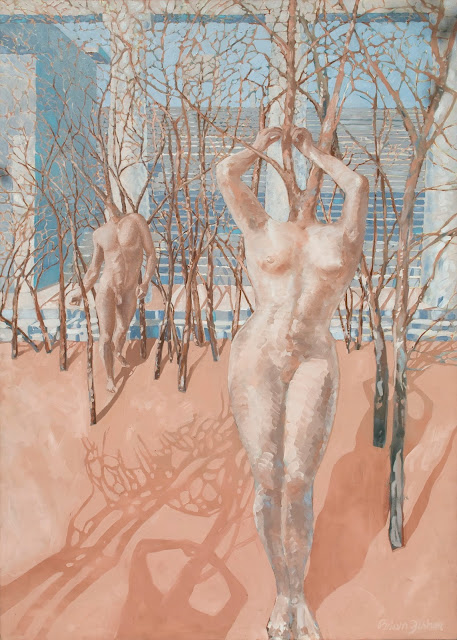 Brian Fisher, "The Pull of the Earth" 84x60 in.  oil on canvas, 1985 Haikus on Gravity by Philip Hart For the weakest force, A simple poem form, for the Least understood force. The sun does not set, Leaving the world in darkness - The world turns away. To move forward, you Must lift yourself from the ground And let yourself fall.   Only the weakest Of the four forces directs The paths of the stars.   The moon falls earthward, The earth falls into the sun, And both keep missing.   Puffy, lazy clouds - Daring gravity to do Something about it.   Her body bends light, Pulls on the planets and stars - How should I resist?  I've been making images of Green Men and tree people for as long as I can remember, at least since I first read J. R. Tolkien's descriptions of Fangorn forest and it's tree shepherds.  This painting, The Pull of the Earth is from a series that explored relationship, desire and the mysterious force that is physical attraction.  If every o
Post a Comment
Read more
More posts