Showing posts with the label Apollonius of Rhodes
Show all 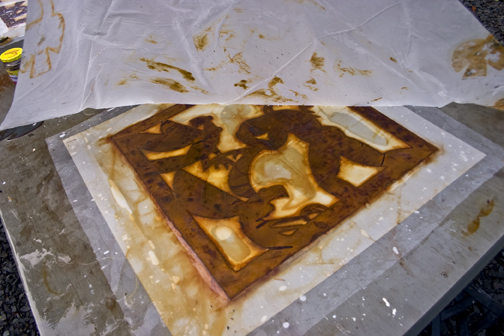 Fall rains, or our seasonal wet, have finally arrived on Vashon Island and in the Pacific Northwest.  I have been thankful for our delayed Fall weather and the extended opportunity to work outside. Yesterday, though, the fantasy ended and my outside rusting process came to a close.  Here are a few images of me taking apart the process and revealing a rust plate and rusted image. This rust print is sourced in Apollonius of Rhodes description of The Harpies attacking King Phineus of Thrace, (Thrake.)  Phineus first traded his sight for foresight and was subsequently punished by Zeus for revealing too many secrets of the Olympian gods.  Zeus sent the Harpies to snatch any food set before Phineus and befoul any scraps left behind.  When Jason and the Argonauts befriended  Phineus the winged Boreades, Zetes and his brother Calais, gave chase.  They pursued The Harpies to the Strophades Islands where the goddess Iris directed them to turn back and leave the Harp
1 comment
Read more
More posts